I found a very legit trail (and attached network of trails) while I was in Sapporo, Japan. I had hoped to travel further into the wilderness on island of Hokkaido, the northern island of Japan, where Sapporo is located, but time and honestly, my energy stores, would not permit it. In the end, I’m very happy with the trail I did find, and plan to come back here when I can rope in a friend to do the wilder stuff with me.
I had messaged an outdoor store before leaving the USA, Sapporo Experience Base, to find out more about the area’s trails. When I was messaging I found an English speaker on the other end, but when I got to the store in person, no one spoke English. That was fine, I used a translator app and the staff were very helpful in pulling up the Suunto app/map of the area, which gave me some good ideas. The store itself had some good looking gear, especially if you are into Salomon. It was on the other side of a great park to run through, Maruyama Park. There was road and trail running, as well as a shrine and a zoo. Definitely a good option for some combo running & site-seeing, located about two miles from Sapporo Station if you want to skip transit altogether and just hoof it there.

Part of my run through Maruyama Park

The hardest part is finding out where to go.
Finding trails from afar in this part of the world did prove difficult for me, because none of the mapping/tracking apps I use seem popular in Japan. The REI app, “Trail Run Project” had some routes around Tokyo, but that’s about it. “All Trails” had next to nothing, furthermore, the app uselessly included common site-seeing routes as “trails”. Suunto’s app, “Moves Count” had the most information, at least around Sapporo, in the form of a heat map. I imagine that is because the brand of watch sold at Sapporo Experience Base is, you guessed it, Suunto. I may have to invest in a GPS device for future trips. Lonely Planet published a Japan Hiking Guide at one point, now out of print, and the only copies I could find were selling for US $250+ on EBay and Amazon, so I decided to make do without.

Getting to the Trail:
Trailhead: Asahiyama Memorial Park

View of Sapporo from Asahiyama Park. The city turned out to be much bigger than I had realized, so I’m glad I got this view of it!

I took a taxi to save time, and it was about US $10 from Sapporo Station area. Many bus lines go to the area, just depends where you are coming from, hopefully you have access to the internet and can figure that part out best for you. However, there is a bus stop right next to the park, that bus line “13” hits. Try to make this stop your drop off, the others stops that are nearby are situated at the bottom of a pretty steep hill, and if you are going to be running/hiking, you’ll want to save your energy for a more scenic climb! There is also a parking lot if you have your own car.
Finding the trail:

This is the very first part of the trail, where I was finding my way to it.

Here is the rest of the route, to the end, and including the tiny offshoot I made before deciding to turn in for the evening.

This I did pretty much by accident, but see the picture, and you should be able to find where I headed out. After snapping some pics of the city from the main observation area (you can’t miss it), I turned up the hill and ran behind and to the right of the main building structure. From there, I kept on a well groomed path that was even paved in some places. At some point I saw a break in the forest that turned from the main path, and I took it. It was a steep, overgrown climb at first, and the climbing would continue to happen intermittently throughout the run, but overall the path was well groomed and well signed, though not in English. Meters are marked, but keep your bearings so you know which way you are headed.

Casually running back to my camera.

I generally headed up and east. You may have more time than me and as a result would be able to add more twists and turns on. I would- it gets amazing up there. I managed to do an almost-loop, winding up at another trail head about one mile away from where I started. I really wanted to do more, but this run was at the end of my day, and my inner adult chided as I was heading further up the mountain 45 minutes before sunset- “Hey, Holly, you may get stuck out here in the dark, if we are having enough trouble navigating the terrain with light.” So my inner child sulked but down we went, and we got her Starbucks on the way home as a distraction. (If you look closely at the map of my run, you’ll see a point where I ran just a tad off course and then back- that’s me being cautious, but if I had kept going that way would have taken me to the summit of Mt Moiwa).

Would have run in that direction if I had more daylight. 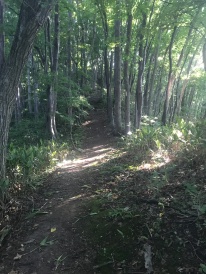 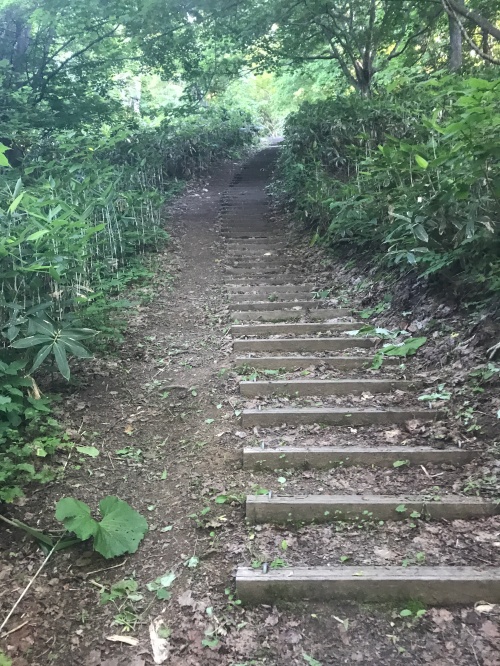 It was a great run, and I’ll leave here with some tips:

If you don’t have a phone or GPS system, write down the kanji for signs you may come across or destinations you want ot hit. I was half a mile up from Sapporo and saw no signs in English, so I imagine in more isolated areas, whether you head further into this area or into other parks of Hokkaido, there is a chance of no English signage.