I’m happy I made it out somewhere new to run this week. I needed an energizer after logging some quite boring miles around my home. 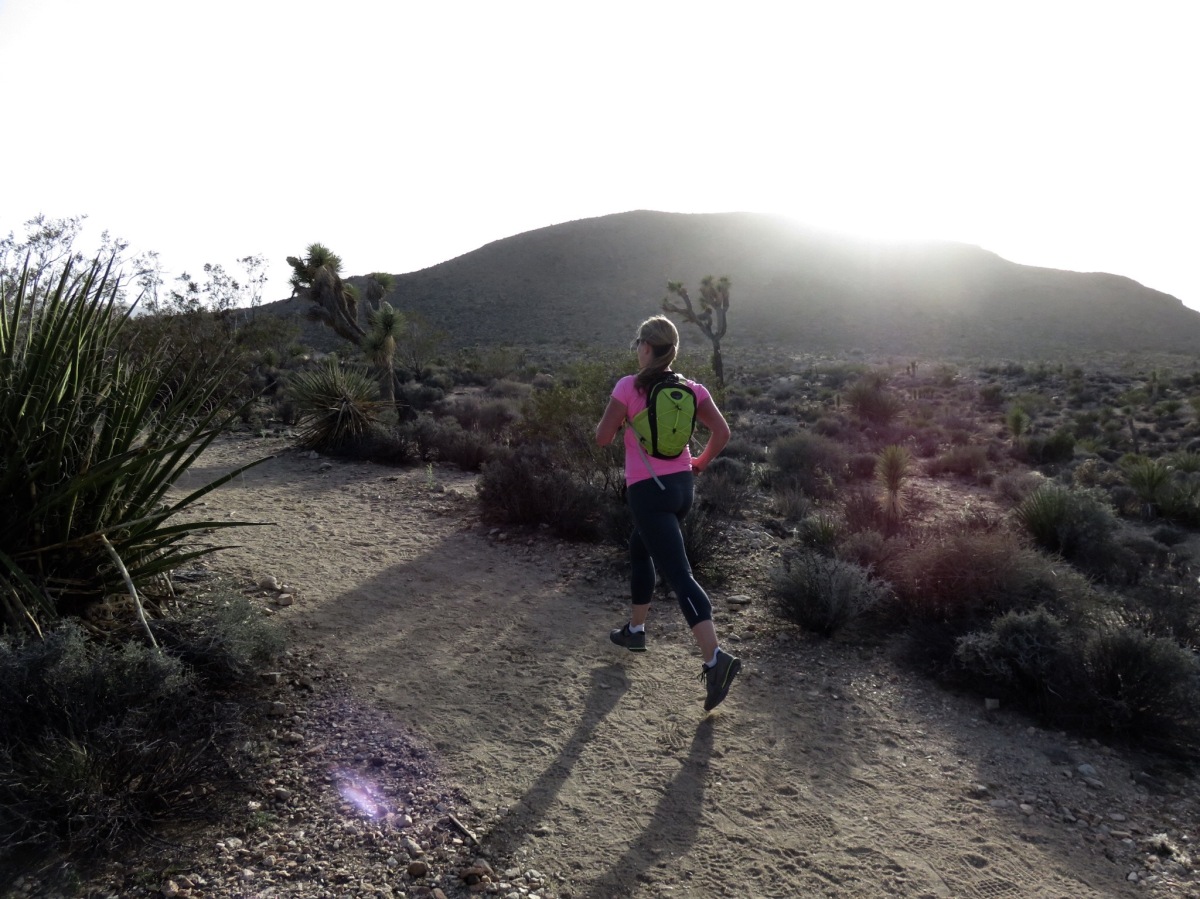 I just got back from a short trip to Joshua Tree National Park. I had a few days off of work and saw it as an opportunity to go run somewhere new. I’m not a camper (yet!) but I found an inexpensive place to stay on the east side of the park on AirBnb. I enlisted my runner friend Annie to come with me. Unfortunately she wasn’t able to make it out till later the second day I was there, but we still got some good runs and an awesome sunset in.

The first night I was there I stopped in at a backpacker/camping outfitter store- Nomad. The official visitors’ centers for the park were closed and I figured an area retailer would have the information I was looking for. The staff there was super friendly and recommended we check out the Boy Scout Trail. It is an out and back (or point to point if you use two cars). They also recommended Stubbe Springs Trail for running, which we didn’t get to, but I thought I’d mention it here in case someone wants to give it a try.

The winds were intense on our first running day, so waiting for Annie to arrive was fine and gave me a chance to catch up on reading and work on some writing. I also stopped by the Visitor’s Center to see if there was any further information to gather. The staff there recommended Pine City Trail as a nice run. Once Annie arrived we booked it out to the trail to get a run in before the sun went down. It’s a relatively short trail for a run, maybe 3 miles round trip, but we made it longer by parking at the lot on Geology Tour road and running north on the road to where the trail begins, which added on about a mile (each direction). We ran a total of five miles, out to where the namesake trees began, and where there were also some large boulder formations. The trail itself is pretty flat, climbing maybe 200 feet and not technical. We snapped some pictures and ran back to the car to catch the sunset. 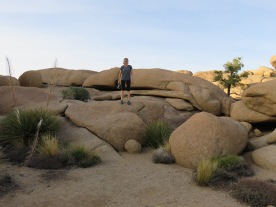 Annie was all about climbing on the rocks. I was all about looking for snakes. I’ve still never come across a rattlesnake in 6+ years of trail running in SoCal. 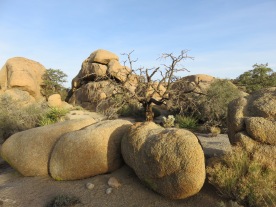 I liked this tree, that’s about it.

I had overheard one of the park Rangers at the visitor’s center telling a couple about a lookout called Keys View, so we headed there, making it just in time to watch the sunset. It was windy and cold but so beautiful. After a pit stop at the pharmacy for some toiletries and barbeque from The Rib Co., we retired pretty early. I turned the light out by 11, but I probably didn’t fall asleep till 3 in the morning. Ever since I was burglarized last month, I’ve had a difficult time falling asleep, and adding to the fun was Daylight Savings Time fallout, and the fun discovery that Annie is a hardcore kicker in her sleep (we were sharing a bed).

We were lucky, the strong winds didn’t blow out all of the atmospheric phenomena that make for great sunsets. 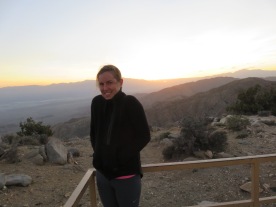 Many park visitors were of the same mind as us. Sunset and chill.

The plan was to do 15-16 miles on the Boy Scout Trail the next day. The trail is about 7.5 miles out, with the option of leaving a car at the other side, but we planned on doing the out and back from the trailhead on Indian Cove. I had done some more reading on the trail in a book I have, 50 Trail Runs in Southern California, and found out that part of the trail was composed of loose sand. It was more than part- at least 75% of the ground we traveled resembled a beach.

The trail stars out in open desert then climbs through hills of rock formations. I found every part of the run visually and physically engaging. As we were we were running on sand most of the time, our pace was slower than we anticipated and we didn’t make it to the other side before needing to turn back for the day. Despite the fact that we kept up as good a pace as we could and didn’t stop for long, it still took us over an hour to run 4 miles. I would look down at my watch, expecting to see 12-13 minutes per mile, but find we were running closer to 15 minute miles. We re-evaluated our plan at the four mile mark, decided to run one more mile, to where we could see over the other side the rock formations we had climbed up. I will add that there was also about a mile and a half (3/4 mile each way) on the trail that required more hiking and scrambling than running. According to my Garmin, the trail climbs steadily from about 2,900 ft at the head  to 4,100 ft at the five mile mark, with most of it runnable. After the run we grabbed lunch at Natural Sisters Cafe, where I had a very tasty black bean burger. I’m not usually a fan of vegetarian fare, to the point where I sometimes get suspicious of it, but seriously, that sandwich was delicious. 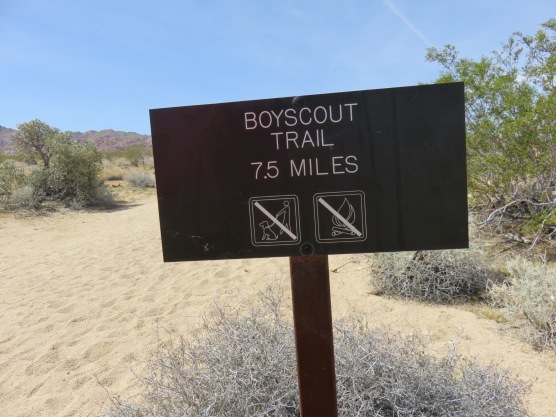 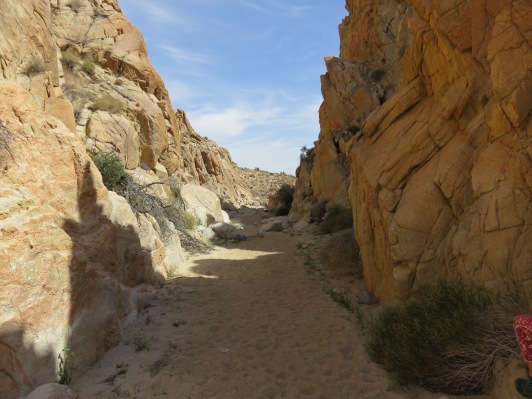 The only spot of shade on the trail. I ran with 1.5 liters of water and another liter of sports drink (watermelon NUUN). 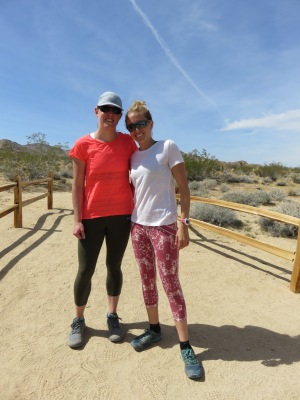 Finished and ready to eat. I got hungry about 45 minutes in. It was hard work.

Sorry for the messy photo. I decided it was picture worthy after a few bites.

I’m happy I made it out somewhere new to run this week. I needed an energizer after logging some quite boring miles around my home. It was a bit astonishing for me to realize how much I’ve strengthened my legs since last year. Running on sand felt natural and I enjoyed it. I have been hitting trails and hills often on my runs, and now I see how it serves me to keep at them regularly, so I don’t have a mental block about running off road when a good opportunity to run somewhere new and exciting presents itself.

I haven’t mentioned any routes on here that you will have difficulty finding on even a basic map of Joshua Tree. Everything was easily accessible from the road & parking lots. Natural Sisters Cafe and The Rib Co. are both on Twentynine Palms Hwy.