Last Sunday I had planned on finding a new trail to run in or around Houston, or maybe revisiting one if I had too. As I sat in my living room trying to figure out where to go, I felt unmotivated to drive far, and settled for running the gravel path around Memorial Park. I had run only five other miles in the week because of some funkiness in my knee, but with the issue under control, I wanted to at least get in another hour of running before the week expired. I made two decisions. I would settle for a relatively dull run around the park, but would treat myself to a trip out of town the next weekend for something different.

Fast-forward four days, and you’ve found me writing this from a coffee shop in Austin, Texas. I found a AirBnB in West Austin, taking out a room in a house full of dudes designing an app. I was really excited at the prospect of inserting myself in a “Silicon Valley” type situation, but alas, I have no high-stakes shenanigans to report (yet). What I do have to report is that I went on a delightful trail run not long after arriving, which I’ll report on a paragraph or two down.

On my drive from Houston to Austin, I picked up listening to “The Picture of Dorian Gray”. I started it last September, on my drive from Los Angeles to Houston. It’s a dark choice, but I saw a gorgeous and grotesque artist’s interpretation at the Chicago Art Institute last June and got inspired to read (listen to) Oscar Wilde’s gothic novel. ANYWHO, a character in the novel, Lord Henry, is dependable for accurate yet somewhat depressing descriptions of human behavior and beliefs, and he tells Gray at one point that the senses are a cure for the soul, and the soul a cure for the senses. I mulled this over, as I was driving to the Texas Hill Country to cure something that I was yearning for in my soul- a taste of adventure.

When things suck, for lack of a better word, when life just doesn’t feel right, I throw myself into something that will startle, refresh, or at least be distracting for, my senses. Watch something mindless, eat like its going out of style, or seek out some sort of companionship because being alone is just unbearable. Then there are more rare moments, where nothing is as interesting as what is going on internally, and I’m pushing away all the distractions at once, so I can figure out what is happening in the space between my ears. Unfortunately I think I live more in the former mode than the latter, and I think it would be nice to flip the situation. I’ll never figure the world out, but I think I have a fighting chance of nailing down what really makes me tick someday.

Trail Running often joins those two extremes. Outside, alone on the trails I experience life first hand.  The sensory experience of the world is limited to how I take it in, no memes or sitcoms to interpret human behavior for me. This is how I get closer to answering, “Who am I”? For the record, I still am not sure.

Today’s run was great. About a mile in, as I was mulling over life events and major decisions, I crossed paths with two people on a tandem mountain bike, and they warned me about a rattlesnake they had seen. I tried to be chill about it at first, but called out as they rode off, “ON THE TRAIL?”

“YES!” they shouted back.

Yikes. I came across a freakin’ alligator on a trail not too long ago, and that was startling, but this gave me the willies. The trail had a decent amount of overgrown single track, and I didn’t feel comfortable letting myself zone out with my thoughts for the rest of the run, so I didn’t. I paid heavy attention to every step, taking in as much detail of the ground as I could with each move forward. I never saw the snake, but for my efforts in avoiding it, I caught sight of a bunny that held still as long as I needed to snap a picture, and as I turned to resume the run, three deer bounded right in front of me! If I hadn’t been looking for the snake, I wouldn’t have seen the bunny, and if I hadn’t stopped for the bunny, I might have missed the deer.

I have two more days of running to do here, and I’m really looking forward to them. Whether I see something new or think something new, its all good. Lord Henry was right, sometimes we need to get away from all the input, and other times its great to get out of ourselves.

Wildlife! It didn’t move from the moment I caught sight of it until I ran off. 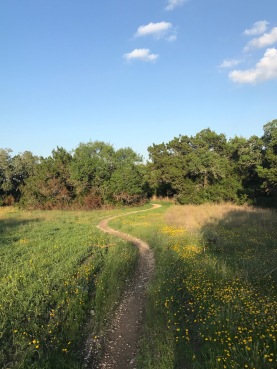 This was my favorite view of the whole run.

The trail wound in and out of woods.

I appreciated the chance to get on some technical terrain. 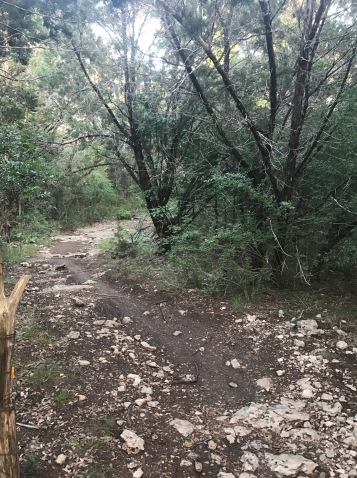